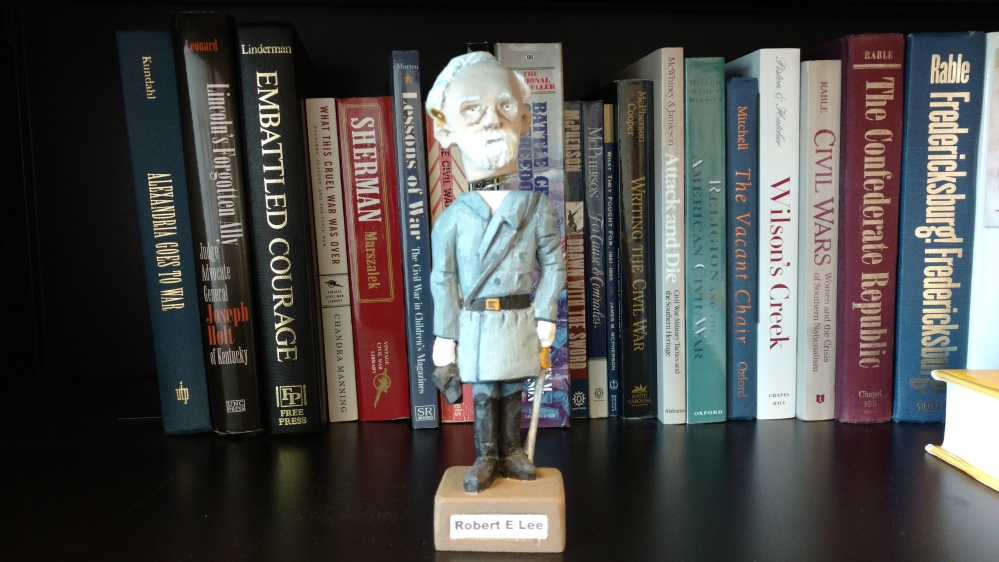 As many of you know, my office is located in the Abraham Lincoln Presidential Library and Museum. Those of you who know me well also know I was once a great admirer of Robert E. Lee. One of the best aspects of working at ALPLM is its vast cohort of enthusiastic and knowledgeable volunteers. Last year, I was invited to do an educational program for them on Jefferson Davis. I jumped at the chance and the program had a large and engaged audience. I got invited back this year and was able to pick whatever Lincoln-related topic I wanted, so I went with Robert E. Lee. This is a very personal choice given how my perspective on Lee has changed over the years but, unbeknownst to me until a few days ago, it has also proven to be a controversial choice among the volunteers themselves and not in the way you might think. Apparently, many people around here are concerned about how Lee iconography is currently under assault in places like New Orleans and Charlottesville. Having written the talk two weeks ago, I’m now wondering how much I should tailor it to this new context and what that says about my own feelings about the man and his image.

So, first a little about me and Bobby Lee. As I’ve mentioned on this blog before, the Civil War drew me in when I was very young and a large part of what attracted me to the topic was the popular epic narrative surrounding Lee and the Army of Northern Virginia. I was fascinated by the personalities in that army and the almost poetic story that had been built by folks like Douglas Southall Freeman to describe its rise and fall. I completely bought into the image of Lee as the brilliant, reserved, and honorable leader whose amazing battlefield feats stood in ironic contrast to his reluctant break with the Union he’d sworn to protect. My Lee was a tragic and noble figure and I always kept a copy of the Matthew Brady photo below because it best depicts that Lee—heartbroken after surrendering at Appomattox but still upright, resolved, and honorable:

In grad school, my opinion of Lee started to change as my opinion of the Confederacy itself changed, but I still liked to consider him somehow apart from the pro-slavery rebellion I was beginning to understand. In my mind, he was still a reluctant participant in that struggle and a historical figure worthy of admiration. Heck, my wife even made me the wooden bobblehead of Lee at the top of this article (based on the Brady photo). Years of studying the Civil War have gradually chipped away that Lost Cause and/or Romantic vision of Lee, but frankly I’m still not sure how to balance Lee’s bad qualities with his good ones. As a historian, all I can do is rely on the actual evidence at hand to create a new image of the man outside of the myth (with a lot of help from the late great Elizabeth Brown Pryor).

This was the attitude I brought with me when I wrote my talk. Indeed, it struck me immediately as odd that I am only now writing something about Lee. Sure, he makes a couple of cameos in Battle Hymns and I’ve reviewed a couple of books about him, but, since becoming a professional historian, I’d never offered my opinions on the man who was central to my original fascination with the Civil War. Part of the reason is those opinions are constantly in-flux, but I nevertheless embraced this opportunity to put them down on paper. The result, I think, is a portrait of a man devoted to duty and honor whose opinions on race and nationalism led him down a dangerous and ultimately destructive path during the Civil War. Morality wasn’t really a factor in the talk—leaving it to the audience to judge for themselves.

But then I had this encounter on Friday. I was attending an event elsewhere in Springfield and one of the volunteers spotted me. He came up and informed me that many of them were very interested in my upcoming talk. I took it as a compliment and thanked him. However, he elaborated that the reason for their interest was a petition many had signed protesting the removal of Lee’s statue in New Orleans. Suddenly, this talk got a lot more interesting.

For starters, if I needed more proof that Lee’s image had transcended the actual historical record and become something much larger, what better evidence then a bunch of volunteers at the ABRAHAM LINCOLN Presidential Library and Museum writing a petition to save a statue of Lee 800 miles away. These people spend every day praising the man who saved the Union and helped bring about the death of slavery, but apparently not a small number are worrying about the public image of another man, who did more than anyone to oppose both of Lincoln’s goals. Are they like I was and so taken with the Lee legend that the don’t see the irony of their position? Or, am I the one who’s wrong–having spent so many years immersed in academic study of the Civil War that I’ve lost perspective on Lee and his proper status as an American icon?

Ultimately, I’ve decided to leave these questions unresolved and take them with me into the talk. Part of what makes the volunteers such a good audience is they’re always eager to start up a discussion afterward, so we’ll see what that reveals about them and myself. I’ve learned from teaching that the best kinds of class discussions are the ones in which my own opinions haven’t totally crystallized. Folks say we all have to “get right with Lincoln” but us Civil War people (or maybe US historians in general) also have to “get right with Lee.” I’m not sure I’ve fully done that yet, but this talk might make it happen sooner than I expected.