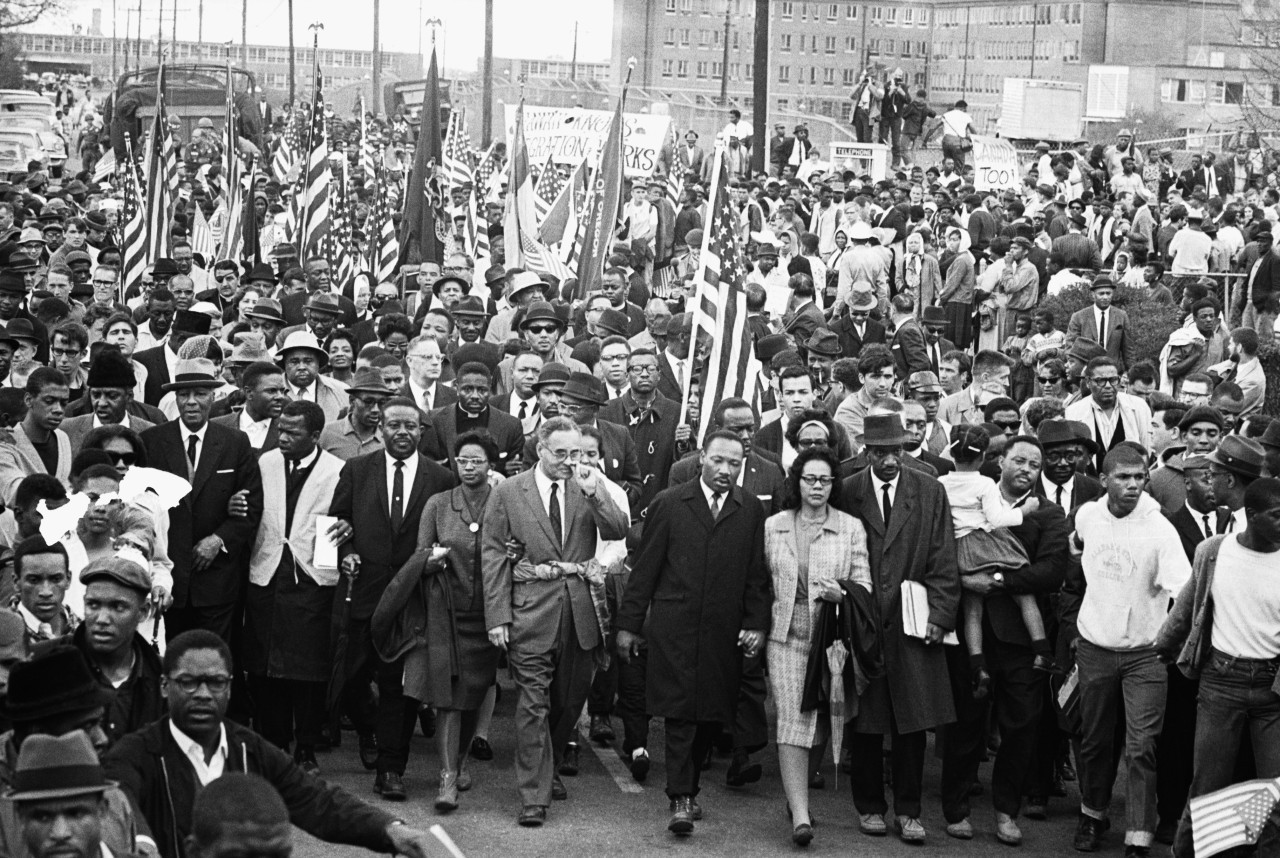 So, I finally saw Selma this past weekend and have a few comments about Civil War images and symbols in the film. I think it’s worth considering how it uses them and what that tells us about their current and historical associations.

Unsurprisingly, given the film’s subject, the Confederate battle flag is the most prominent and frequently utilized Civil War symbol. It’s almost absent for about the first thirty minutes, but abruptly dominates the screen during the first appearance of Alabama Governor George Wallace (Tim Roth). Wallace is giving a speech in defiance of Martin Luther King, Jr.’s (David Oyelowo, clearly deserving an Oscar nomination), plan to use Selma as the front line in his battle to secure voting rights for African Americans. The Alabama state flag hangs behind Wallace, but two massive Confederate battle flags flank it. In fact, I think the flag is visible in every one of Wallace’s scenes, save his last, in which he receives “The Treatment” from LBJ (Tom Wilkinson) at the White House. Wallace’s association with the Confederacy is also emphasized in an earlier scene in his office, which is a veritable shrine to the Lost Cause. Pictures of Confederate generals litter the walls, including Everett B. D. Julio’s The Last Meeting and a portrait of Nathan Bedford Forrest. Once the Selma March begins, those who oppose it are consistently shown with Rebel flags as they hurl insults or worse at the marchers. Director Ava DuVernay further builds on this association between the South’s past and the March by having a white man on horseback whip a pair of marchers at the climax of her depiction of Bloody Sunday. White supremacy, slavery, and the Confederacy are closely linked for DuVernay and she effectively uses their symbols to place the March within a broader historical context.

To some extent, all of this Confederate symbolism pays off in the films final action. Once the marchers finally make their way out of Selma and head for Montgomery, they are frequently shown holding U.S. flags. This not only aligns them with the United States itself, it associates the nation with the progressive tradition they represent–seemingly stretching back from the Declaration of Independence, through the Civil War North, to 1965. The film’s final spoken lines are King reciting the opening verse of “The Battle Hymn of the Republic” on the steps of the Alabama Capitol. King frequently used the Civil War anthem in speeches (as shown by John Stauffer and Benjamin Soskis in their recent history of the song) but its placement in the film also serves as a final reminder that he and the March are part of a longer struggle for civil rights in America.

Of course, DuVernay’s use of these symbols may simply stem from a desire to portray the March accurately. Contemporary photographs and footage (some of which are used in the film) show marchers waving American flags while those who oppose them hold up Confederate flags on the sidelines ( as seen in the images above). I don’t know if Wallace actually adorned his office with Confederate portraits, but I wouldn’t be surprised if he did. Given that the March took place at the tail end of the Civil War centennial, many at the time would have understood the historical meaning of these symbols. DuVernay’s film may well associate the Confederacy with white supremacy and slavery because the people she depicts, on both sides, did too.