During the past two weeks, BBC Radio 2 ran a documentary on Civil War music and I strongly recommend it. It gives a good mix of narration by Kris Kristofferson, commentary from experts, and great renditions songs from and inspired by the war. The first part covers music during the war and the second examines its influence on music history and Civil War memory. It brings a great deal of depth to the subject and the producer should be commended for the amount of work that clearly went into the project. Civil War historians, buffs, and even those just interested in music or history should really give it a listen. I’m really honored to have been a part of it.

END_OF_DOCUMENT_TOKEN_TO_BE_REPLACED

In 1985, Tom Petty was one of the most successful Rock artists in the world. However, critics considered him as a second-tier New Wave act–not as complex a lyricist as Elvis Costello, not as catchy a tunesmith as Ric Ocasek, and not as experimental as The Police. Partially in response to these criticisms, Petty started broadening his sound in the mid 1980s, a shift that eventually resulted in a career revival after 1989’s George Harrison- and Jeff Lynne-influenced Full Moon Fever. Along the way, Petty made his most lyrically and musically ambitious album: Southern Accents. It also happens to be about the Lost Cause.
END_OF_DOCUMENT_TOKEN_TO_BE_REPLACED

150 years ago today, Abraham Lincoln publicly declared his love for the song “Dixie.” Having just returned from the recently-captured former Confederate capital of Richmond, he settled back into the White House and soon found himself “treated” to a serenade. These were a common occurrence in 19th Century America, in which groups of people would perform music outside of the homes of people they admired as a show of respect. I put “treated” in quotations because the serenade’s recipient was expected to respond and Lincoln reportedly hated coming up with the necessary little impromptu speeches. According to his contemporary biographer, Joseph Hartwell Barnett, Lincoln once declared (with typical folksiness), “These serenades bother me a good deal, they are so hard to make. I feel very much like the steam doctor, who said he could get along well enough in his way of practice with almost every case, but he was always a little puzzled when it came to mending a broken leg.” END_OF_DOCUMENT_TOKEN_TO_BE_REPLACED

“Marching through Georgia.” Music and Lyrics by Henry Clay Work.

I’m delighted to announce that my final New York Times Disunion piece is up. As I mentioned in an earlier post, it discusses Henry Clay Work’s most popular song, “Marching through Georgia.” You can read it here. Thanks again to Clay Risen for including me in this awesome endeavor.

END_OF_DOCUMENT_TOKEN_TO_BE_REPLACED 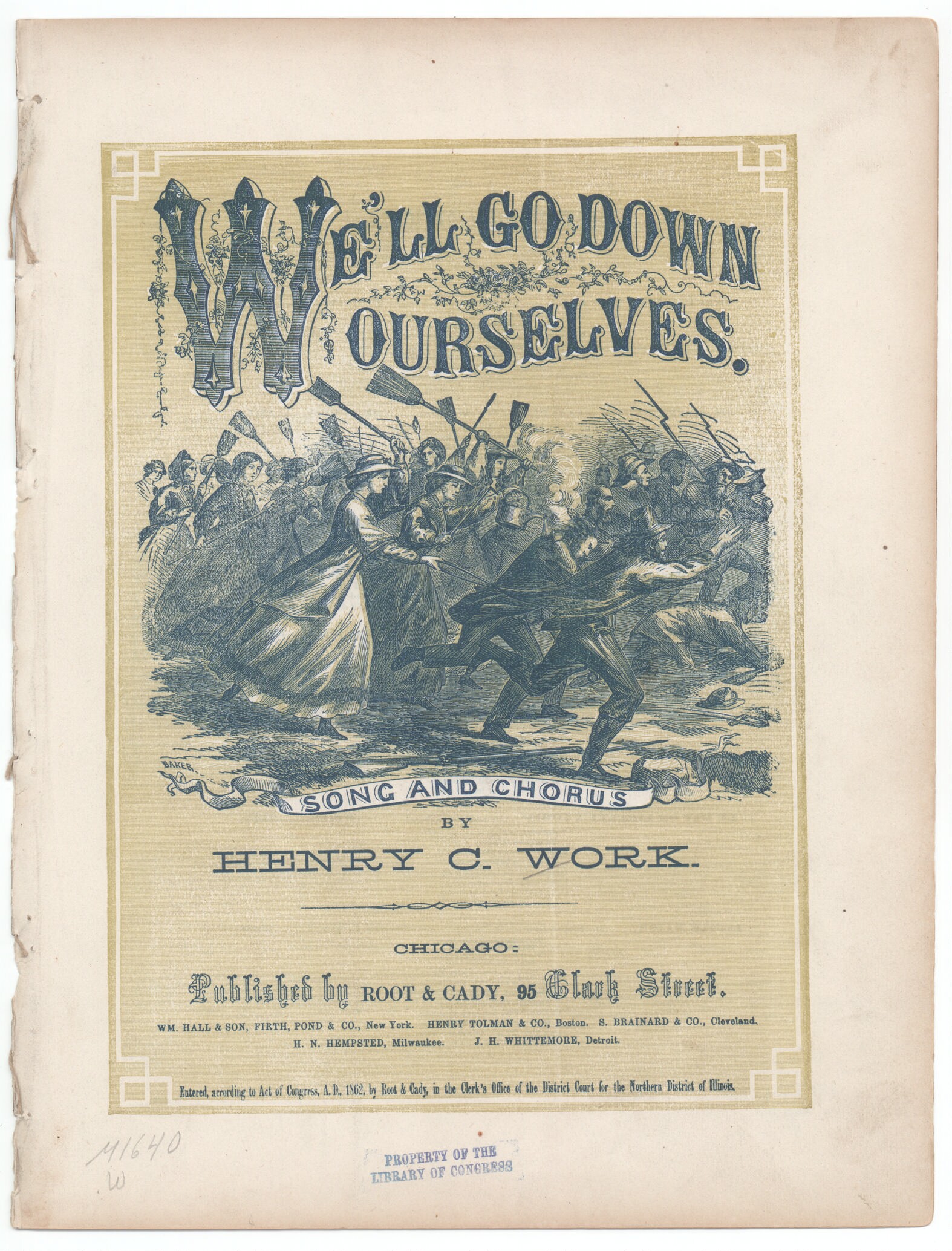 I’ll admit that this gem from Henry Clay Work slipped under my radar until I was asked to make some remarks about it for a Civil War music concert at the Newberry Library. My previous research largely focused on the war’s most popular songs and there isn’t much evidence that “We’ll Go Down Ourselves” enjoyed much popularity, then or now, but it’s a fascinating piece for a number of reasons. END_OF_DOCUMENT_TOKEN_TO_BE_REPLACED

Available: As sung by Burl Ives & as sheet music.

As the end of the Civil War sesquicentennial approaches, so too does the end of one of its most successful elements, the New York Times Disunion Blog. Clay Risen has done a great job curating and editing this collection of thoughtful short essays and I’ve been fortunate enough to be included among its authors. My final contribution will appear in a couple of weeks and discuss the history and resonances of “Marching through Georgia.” I grew to admire the song’s author, Henry Clay Work, while researching my book,  so I’ve decided to devote a couple of entries to some of Work’s lesser-known pieces in anticipation of my Disunion article. Today, I’ll focus on one of his most abolitionist Civil War tunes, “Wake Nicodemus.” END_OF_DOCUMENT_TOKEN_TO_BE_REPLACED